“This is the 20th ship we have christened over the last five years,” said Austal USA President Craig Perciavalle. “We are blessed to have christened so many ships through the years but this one is special. It is a distinct privilege to build a ship named after your namesake city and this has truly been a community effort.

“The support we have received from Senator Shelby, Senator Jones, Congressman Byrne, the county, and city has been incredible and has played a major role in our success to date.”

Byrne, who represents the Mobile area in the U.S. House of Representatives, was the featured speaker at the event and his wife, Rebecca, had the honor of sponsoring the ship and breaking a bottle of champaign over its hull.

“It is such an honor for a future Littoral Combat Ship to be named after the City of Mobile,” Bradley Byrne said. “Our area takes such pride in building these fine ships, just the latest vessel in Mobile’s long history of shipbuilding. I know the spirit and patriotism of Mobile will be encapsulated in this ship.”

Rebecca Byrne was being honored for her years of volunteer service to the Mobile community, including past stints directing the United Way of Baldwin County and the Community Foundation of South Alabama. Perciavalle said Austal was “honored to host Mrs. Byrne as the ship’s sponsor.”

“Her dedication to improving the quality of life for so many deserving members of our community make her a clear choice as the sponsor of the future USS Mobile.” 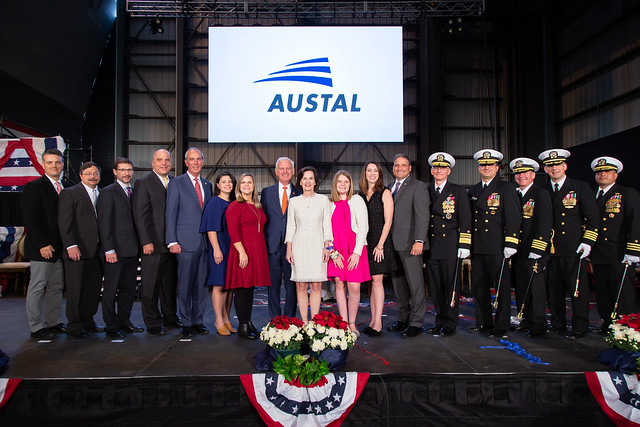 The Independence-variant littoral combat ship (LCS) is a high-speed, agile, shallow draft, focused-mission surface combatant. It is designed to conduct surface warfare, anti-submarine warfare, and mine countermeasures missions in the littoral near-shore region, while also possessing the capability for deep-water operations.

Austal USA is also the Navy’s prime contractor for the Expeditionary Fast Transport (EPF) program. Austal has delivered 10 EPF, with a total of 14 under contract.