THIS MORNING: Snow has finally started across parts of central Alabama. It will snow for a couple of hours in places like Gadsden, Birmingham, Oneonta and Tuscaloosa, and some places will get  up to 1 inch of snow. The entire band of rain will gradually fill in with snow as it takes on more of a north-south orientation. Most spots will see about two hours of snow. 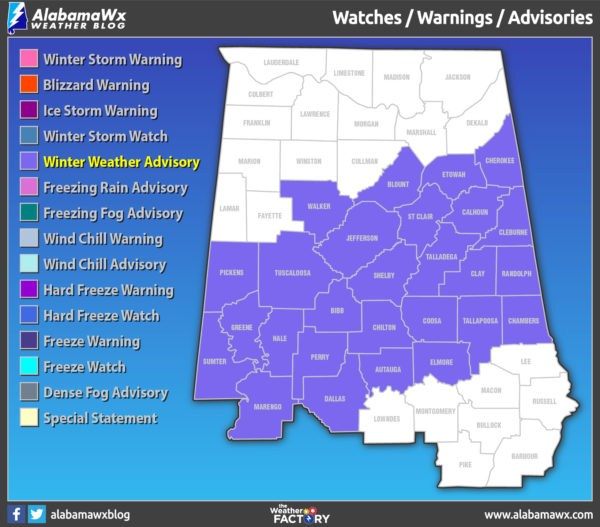 WARNING CHANGED TO ADVISORY: The winter storm warning has been changed to a winter weather advisory for central Alabama. Counties from Washington, Monroe, Dallas, Autauga, Elmore, Tallapoosa and Chambers up to I-59 are under a winter weather advisory. The advisory has been canceled for Marion, Lamar, Fayette and Winston counties. The winter storm warning has been canceled for the Tennessee Valley counties of north Alabama. 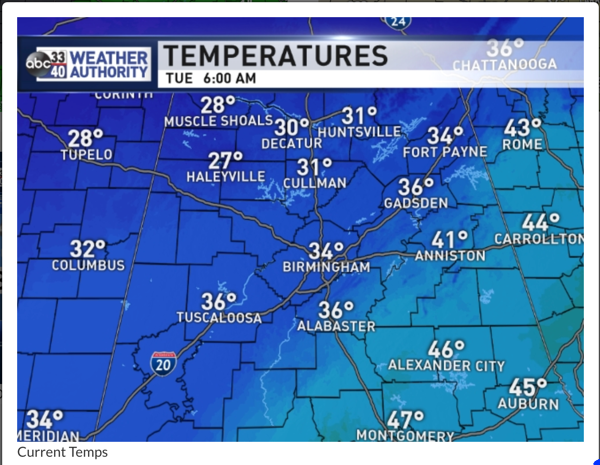 TEMPERATURES: Temperatures are dropping along I-59, but fortunately they won’t hit freezing until after the precipitation moves out.

ACCUMULATIONS: There may still be a dusting of snow in the winter weather advisory area this morning.

DRIVING CONDITIONS: So far, roads have been just wet and the snow has ended before temperatures reach the freezing mark. But watch for a few slick spots, mainly on bridges, this morning.

SUN RETURNS: The sun will return by 9-10 a.m. in Tuscaloosa and 10-11 a.m. in Birmingham. This will allow readings to warm from near or just below freezing into the upper 30s this afternoon. This will help melt some of the snowfall and help with conditions.

TEMPERATURES DROP TONIGHT: The air mass has modified. We will still need to be a little cautious during the late night and overnight hours for icy road conditions, but it won’t be as big of a problem as first expected.

WEDNESDAY IMPROVEMENT: Temperatures will warm above freezing by midmorning Wednesday and will combine with more sunshine to improve road conditions. HIghs on Wednesday will top out in the lower 40s.

THURSDAY MORNING EVEN COLDER: Teens will be prevalent Thursday morning as the coldest part of the air mass settles into Alabama. But afternoon highs will approach 50 degrees.

NEXT PRECIP: A few showers may show up Friday evening, but they should be mainly to the northwest of Birmingham. Showers will be possible from Saturday afternoon through Sunday, but it could be mostly dry for us. Looks like the local groundhog, Birmingham Bill (no relation), will see his shadow early Saturday morning.

WEEKEND WARMUP: Look for highs in the middle and upper 50s Friday and returning to near 60 degrees on Saturday.

VOODOO COUNTRY: Looks like another system with decent rainfall amounts and some thunder will arrive for Saturday, Feb. 9. More storms arrive on Feb. 13. No more snow showing up for now.

WEATHERBRAINS: Had a great time talking to Dr. Jon Nese from Penn State University last night. Check out the show now on WeatherBrains.com.

ON THIS DAY IN 1936: Birmingham was experiencing its second-biggest snowfall ever. It snowed for 24 consecutive hours, and when it was over on the morning of Jan. 30, 11 inches of snow was on the ground.

For more weather news and information from James Spann, Bill Murray and other members of the James Spann team, visit AlabamaWx.