Remember that several other candidate/race profile stories were included in Friday’s Digest, which is available online HERE.

3. What’s going on with Jim Ziegler?

5. Skip Tucker and other opinions, man.

ALABAMA DAILY NEWS – Fair Play? AG race gets nasty and might have crossed a legal line.

ALABAMA DAILY NEWS – Parker Snider: Our Elected Officials, a Mirror of Ourselves

MONTGOMERY ADVERTISER – Mission continues to help those without hope.

DOTHAN EAGLE – Contributor Orrin Ames:  The business community, through its ethics, may be the last hope for our nation’s dignity.

AL.COM – Trade fears brew ahead of Canadian gathering in Alabama.

AL.COM – Arming administrators in Alabama schools: what you need to know.

AL.COM – Why do Alabama Democrats divide party seats by gender?

AL.COM – Contributor Frances Coleman:  Why candidates should leave religion out of their campaigns.

AL.COM – Columnist Roy Johnson:  You should listen to the kids, Governor.

ANNISTON STAR – A hospital that will close.

NEW YORK TIMES – We ran out of words to describe how good the jobs numbers are.

Only the Advertiser’s front today… 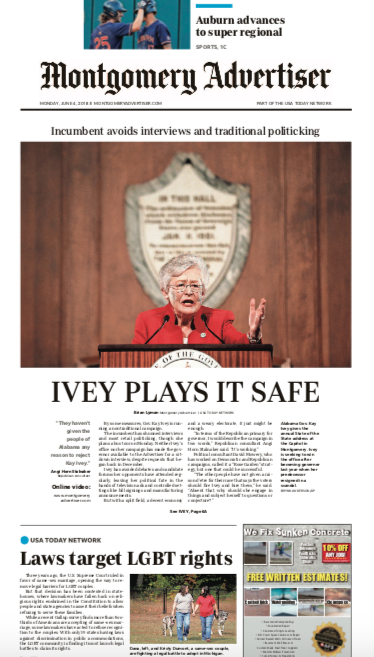