James Spann has the Alabama forecast and the latest on Tropical Storm Barry from Alabama NewsCenter on Vimeo.

OCCASIONAL TROPICAL DOWNPOURS: Tropical Storm Barry, with sustained winds of 50 mph, should make landfall tonight on the Louisiana coast, followed by a slow northward motion through Louisiana and eastern Arkansas. Alabama will stay on the wet, east side of the system, and we will deal with occasional showers and tropical downpours through early next week. 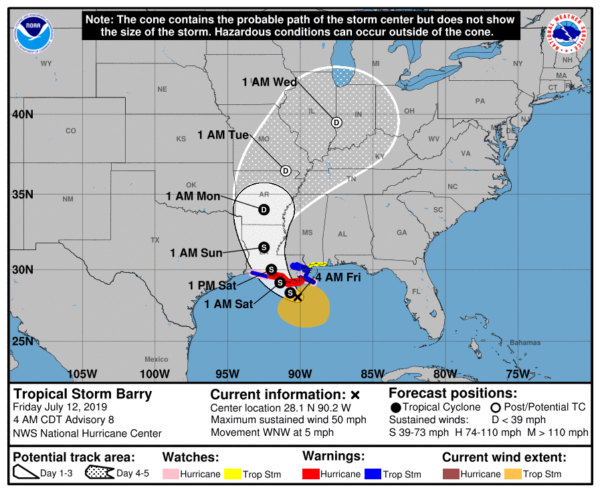 Look for scattered to numerous showers and storms this afternoon and tonight; after midnight the heaviest rain will pull back toward the center of Barry to the southwest of Alabama. The sky will be cloudy at times, and the high today will be between 87 and 90 for most places.

SATURDAY THROUGH MONDAY: The sun could break out at times, but the sky will be generally cloudy Saturday through Monday, with occasional showers and storms. They will be most numerous during the afternoon and evening hours, but in this pure, tropical air mass some rain could come at any hour of the day or night. Unfortunately, there is no way of knowing specific start/stop times of the rain for any given point. The high Saturday will be in the mid to upper 80s, and many communities will hold in the 70s all day Sunday because of clouds and rain.

The heaviest rain should be on the western side of the state, where 4-6 inches is possible near the Mississippi border. Central Alabama can expect 2-4 inches of rain, and the eastern counties of the state will see 1-2 inches. 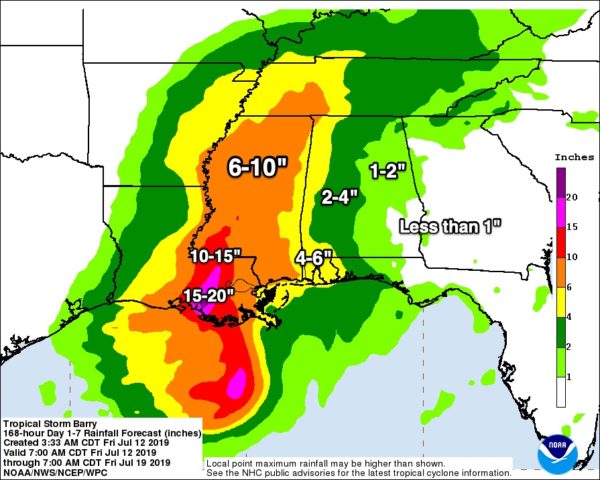 A low-end tornado threat could develop Saturday and Sunday over parts of far west and southwest Alabama; we will need to watch radar trends closely for heavier cells around the Mississippi border. But for most of Alabama we don’t expect any severe weather over the weekend.

ON THE COAST: Double red flags will be flying from Fort Morgan to Panama City Beach today and through the weekend, meaning there are dangerous rip currents and the water is closed. The beaches will be open. While the sun will be out at times, occasional showers are likely over the weekend. A flash flood watch remains in effect for Mobile, Baldwin and Washington counties in Alabama and for Escambia and Santa Rosa counties in Florida. A flash flood watch is also in effect for most of south Mississippi and southeast Louisiana. Parts of southeast Louisiana will see 10-20 inches of rain in association with Tropical Storm Barry, with a high risk of flooding.

The weather on the coast will improve next week with showers and storms becoming more scattered, and the sea will settle down as well.

TRAVEL: I am getting so many questions about driving conditions over the weekend across the Southeast. I possess no special knowledge or skill about future road conditions. All depends on risk tolerance, and that is different for different people. Just pay attention to National Weather Service watches and warnings and keep up with the latest weather information to help you make a good decision.

NEXT WEEK: Barry will pull very moist air into Alabama, and it will linger Monday and Tuesday with a good chance of occasional showers and storms both days. The weather slowly trends drier and hotter over the latter half of the week.

ON THIS DATE IN 1996: Hurricane Bertha makes landfall near Wrightsville Beach, North Carolina, with maximum winds of 105 mph, but the storm surge dealt the most devastation. The U.S. Virgin Islands, along with North Carolina, were declared federal disaster areas. Surveys indicate that Bertha damaged almost 2,500 homes on St. Thomas and St. John. For many, it was the second hit in the 10 months since Hurricane Marilyn devastated the same area. The primary effects in North Carolina were to the coastal counties and included storm surge flooding and beach erosion, roof damage, piers washed away, fallen trees and damage to crops. More than 5,000 homes were damaged, mostly from storm surge. Storm total rainfall amounts ranged from 5 to 8 inches along a coastal strip from South Carolina to Maine. As many as 12 deaths resulted, with eight in the U.S. and territories.

For more weather news and information from James Spann and his team, visit AlabamaWx.