James Spann has the Alabama forecast heading toward tropical storm formation in the Gulf from Alabama NewsCenter on Vimeo.

WATCHING THE GULF: Alabama’s weather over the next five days will be determined by tropical developments in the northern Gulf of Mexico. What is now “Potential Tropical Cyclone Two” should become a tropical depression by midday and Tropical Storm Barry tonight.

The system is about 125 miles south of the Mississippi coast and is drifting to the west. A northward turn is likely on Friday, and the National Hurricane Center forecasts the system to come into the Louisiana coast as a minimal hurricane Saturday morning. 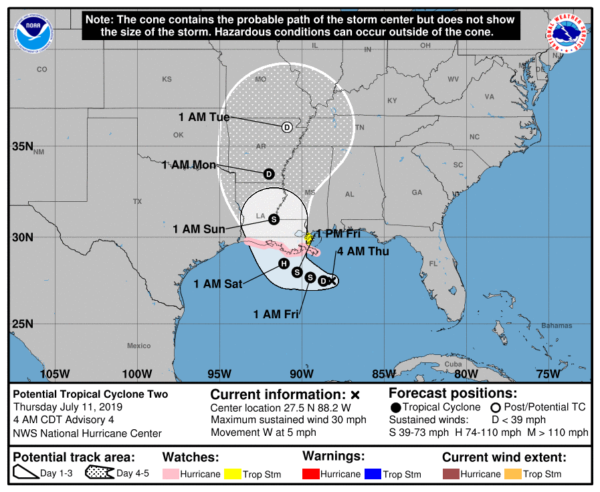 Don’t focus on the center line; tropical rain bands will extend out to the east for a few hundred miles. And, until the system gets a well-defined center and becomes better organized, there will still be some uncertainty in the forecast movement and intensity. We are still seeing considerable model spread, so watch for forecast changes. But, one way or another, this will affect Alabama’s weather in a pretty big way through early next week.

Flash flood watches are in effect for Washington, Mobile and Baldwin counties in Alabama, Escambia and Santa Rosa counties in Florida, and areas west through south Mississippi and southeast Louisiana. 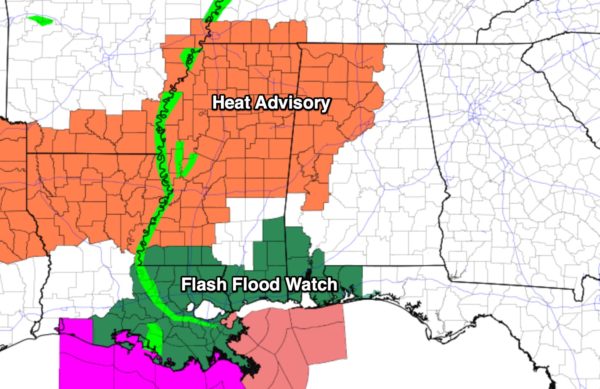 GULF COAST IMPACT: The tropical system will bring occasional tropical downpours to the central Gulf Coast (Fort Morgan, Gulf Shores, Pensacola Beach, Destin, Panama City Beach) today, Friday and over the weekend. There will be breaks in the rain, and the sun will break out at times. Dangerous rip currents are likely, and expect red or double red flags through the weekend. An isolated brief waterspout or tornado is possible as well, especially west of Pensacola Friday and Saturday.

Rain amounts of 2-4 inches are likely from Dauphin Island to Gulf Shores, Pensacola Beach, Destin and Panama City Beach. For the Mississippi coast, 4-6 inches is expected, and some parts of southeast Louisiana could see more than 10 inches of rain because of the slow motion of the tropical system. Flooding is a real concern for New Orleans and Baton Rouge.

The weather on the coast will improve early next week as Barry moves inland and away from the region.

INLAND IMPACT: In Alabama, today will be hot and muggy with developing showers and storms this afternoon and tonight. The high will be in the low 90s, and a heat advisory is in effect again for the northwest part of the state.

Showers and storms become more numerous Friday and over the weekend as tropical moisture deepens, and Barry passes just to the west. Our state will be on the wet, east side of the system, so expect occasional tropical downpours on these three days. Highs drop into the upper 80s Friday and mid 80s Saturday, and some communities could hold in the 70s all day Sunday because of clouds and showers.

The heaviest rain should be on the western side of the state, closer to the center of the tropical system as it moves northward. Don’t be surprised if the quantitative precipitation forecast from the Weather Prediction Center changes again later today and tonight as forecast confidence grows; I would not be surprised if some places in Alabama see 3-4 inches of rain by Monday, especially on the western side of the state. 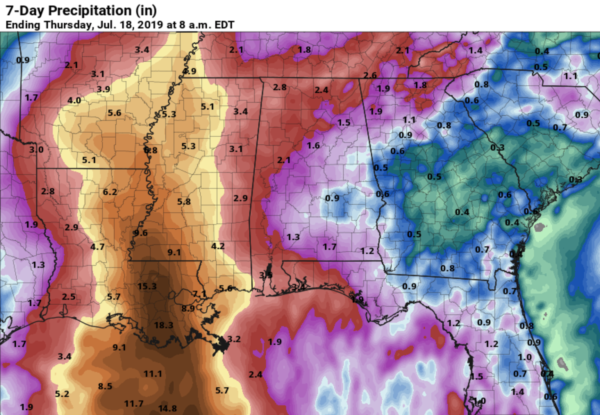 The Storm Prediction Center has parts of west and southwest Alabama in a marginal risk (level 1 of 5) for Saturday. A low-end tornado threat could develop there as Barry moves inland. 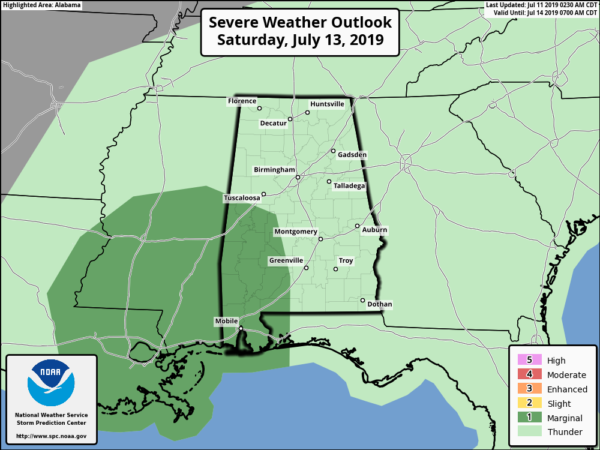 A deep layer of tropical moisture will likely linger through early next week, meaning occasional showers and storms will be likely Monday and Tuesday. The weather will trend drier toward the end of the week.

For more weather news and information from James Spann and his team, visit AlabamaWx.