By Leah Nelson, Alabama Appleseed Center for Law and Justice

In August 2016, a disabled Black veteran named Sean Worsley brought his legally prescribed medical marijuana with him on a road trip from Arizona to North Carolina. On his way through Alabama, Worsley, who earned a Purple Heart in connection with injuries sustained during his 15 months disabling bombs and retrieving the body parts of dead comrades as a Combat Engineer in Iraq, stopped for gas. He played air guitar and clowned around to entertain his wife while waiting for the tank to fill.

The officer found roughly a third of an ounce of marijuana and arrested both of them. Convinced that the grinder and digital scale Worsley had with him to measure out his doses was evidence that he was a drug dealer, he charged Worsley with possession “for other than personal use,” a felony in Alabama. Worsley, who due to his combat injuries is considered by the Department of Veteran’s Affairs to be 100 percent disabled and in need of “maximal assistance” with basic day-to-day activities, pleaded guilty a year later. He was sentenced to five years’ probation and permitted to serve that sentence in Arizona, where he had lived at the time of the arrest.

But keeping up with probation requirements isn’t always easy, or even possible. Probation officers require their charges to have a stable address, but Worsley and his wife, Eboni, had become homeless in the turmoil that followed his conviction. Another Catch-22 stemmed from the Alabama court’s requirement that Worsley participate in substance abuse treatment as part of his sentence. Worsley tried to get into such a program, but the Phoenix Department of Veteran’s Affairs turned him away, citing the fact that he does not have a substance abuse issue and was only using marijuana as legally prescribed by a doctor.

From Alabama’s point of view, Worsley’s inability to comply with the terms of his probation was unacceptable. Worsley had three prior felonies at the time of his 2016 arrest, connected with an incident involving a bad check and some marijuana that occurred a few months after his honorable discharge from the U.S. Army Reserves. Alabama could have used those felonies to imprison him immediately after his guilty plea, but it didn’t. That was as generous as the state was willing to be. He incurred another felony in January 2020: His Arizona medical marijuana card expired and he did not have the $250 to renew it but kept medicating himself anyway. He was charged with felony possession in Arizona when police pulled him over for a routine traffic stop.

In March 2020, Alabama extradited Worsley from Arizona and sentenced him to five years in prison.

Since April of 2019, the U.S. Department of Justice has twice determined that conditions in Alabama’s prison system for men are so bad that they violate the Eighth Amendment prohibition on cruel and unusual punishment. Alabama’s prisons for men are the most deadly in the nation, suffer from corrupt staffing and management, and are flooded with drugs. In 2017, a federal judge found their mental health services to be “horrendously inadequate” and this week ordered federal monitoring because of the system’s inability to sustain improvements without oversight.

Knowing this, Worsley’s wife and mother were terrified about what would happen to him behind bars. They marshalled a coalition of the unlikeliest of allies in an effort to get him out: A friend of Worsley’s from kindergarten who grew up to become a Republican operative; an Alabama legislator and his husband who are former U.S. Marines; a formerly incarcerated music producer turned advocate who is friendly with Snoop Dogg and Charles Koch; a retired federal magistrate judge; retired Alabama corrections officials; a battalion of veteran’s rights advocates and cannabis advocates. And human rights advocates, including the Alabama Appleseed Center for Law & Justice, the Montgomery-based public policy organization where I work as research director.

Everyone got to work. The veterans organized a rally outside the jail where Worsley was being held, holding signs that read “He’s my brother” and “We leave no one behind.” The advocates and lawyers found a statutory mechanism by which Worsley could be permitted to serve his sentence under supervision in the community rather than behind razor wire. We found him a full-time job and lined up pro bono counseling services with a therapist who specializes in treating traumatized veterans.

More than 2,000 people donated a total of nearly $100,000 dollars online. Some of that helped Eboni Worsley move to Alabama and rent a home in Birmingham, where the judge who oversees Veteran’s Treatment Court agreed to supervise Worsley if he were transferred to Community Corrections. Dozens of people came together across professions and political divides to assemble an airtight re-entry plan with extraordinary levels of support. Worsley paid Pickens County the $3,858.40 in fines, fees, and court costs that had been assessed against him. The Alabama Department of Corrections deemed him suitable for transfer.

All that the plan required was for the judge to exercise his lawful discretion to accept Worsley’s transfer into this community-based supervision in light of what so many people recognized to be a clear injustice and a waste of state resources.

That is not what happened. In a Sept. 3 order that focused on Worsley’s history of low-level, nonviolent offenses and probation violations, the judge denied the Community Corrections transfer request:  “Because the Defendant has fled this jurisdiction both times he was released, failed to comply with any condition of bond or probation and has 5 felony convictions, including one he received while on probation from this Court’s sentence, this Court finds that the Defendant is not a suitable candidate for placement in the Community Corrections Program,” the judge wrote. “Therefore, the request is DENIED.”

Pickens County District Attorney Andy Hamlin has repeatedly said that he could have pushed for Mr. Worsley’s immediate incarceration from the start. “Remember, at the time of the plea, he was a four-time convicted felon. Given his circumstances and military service, I used discretion and asked the court to put him on probation. I must apply the law consistently and fairly with every case that comes through my office. Any special treatment to Mr. Worsley would have set a precedent that would have been unfair to others with similar histories and charges,” Mr. Hamlin wrote in an email to Appleseed.

“We find ourselves here not because of failed policies or any nefarious act by anyone that works in law  enforcement or the court system, but because Mr. Worsley failed to exercise any personal responsibility or agency,” Hamlin wrote.

Any day now, a fragile, disabled man who sacrificed his health and youth to serve his country will be thrown into the most dangerous prisons in America – prisons that have been declared unconstitutional, and which do not have any semblance of functioning mental health services – because he made the mistake of bringing legally prescribed medication into a state where that medication is not legal, and because his homelessness, disability, and the differences between Alabama and Arizona drug laws prevented him from successfully complying with probation. 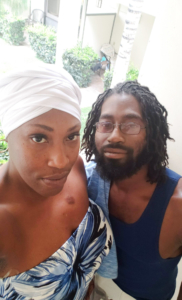 It’s tempting to describe what was done to Sean Worsley as a travesty of justice. But that would imply that what happened to him is a distortion of how our justice system is meant to work. In Worsley’s case, our state’s justice system operated exactly as we have designed it to. What was done to Worsley was the result of Alabama laws being followed to the letter.

Over the years, Alabama lawmakers have had before them an array of bills that could have radically changed the outcome of Worsley’s unintentional violation of Alabama law. They knew that Black people are more than four times as likely as white people to be arrested for marijuana possession in Alabama despite both races using marijuana at roughly the same rate, yet declined to decriminalize simple possession of even small amounts. They knew that disparities in how Black and white communities are policed mean that Black people are far more likely to have criminal histories, yet took few steps to reduce the weight prior convictions would carry in determining a person’s sentence. They knew probation was costly and that people who lack resources struggle to comply with its demands, yet they took no steps to fix it. They knew our prisons were unconstitutionally overcrowded and deadly but have refused to act with urgency about the causes of the crisis.

This is a summer of racial reckoning. On August 31, the white coach of the University of Alabama’s Crimson Tide led his mostly Black team in a Black Lives Matter march to the Tuscaloosa schoolhouse door that George Wallace once blocked. Four days later, in a courthouse just one county over, Alabama’s criminal punishment system shambled on, working exactly how it’s meant to – exactly as we let it work, despite knowing the terrible consequences.

Leah Nelson serves as Research Director at the Alabama Appleseed Center for Law and Justice, a non-profit, non-partisan 501(c)(3) organization that advocates for justice and equity for all Alabamians. Reach her by email at leah.nelson@alabamaappleseed.org.